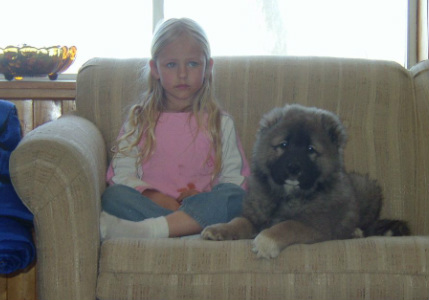 "Are Caucasians good with Kids?"

I frequently get asked this question in telephone inquiries on the breed.  My answer is always a qualified, "Yes":

==>  Yes, if it is a purebred Caucasian, of the correct temperament, it is good with kids, (there are plenty of poor temperaments and mixed-breeds out there for sale).

==>  Yes, if it is a properly socialized, properly disciplined Caucasian, it is good with kids (an unsocialized lunatic in the backyard may not be, no matter how well-bred).

==>  Yes, if it is a properly controlled Caucasian, this big, athletic, dog might not spin around quickly and knock a small child into a coffee table, (even though COs are naturally gentle and slow around children, with a big dog and a small child, there is the potential for this sort of occurrence.)

In addition, I tell these folks that the correct Caucasian temperament can distinguish between a child (non-threat) and a threat, even when in attack mode.  Gurhka (ARBA Grand CH. Medveolo Szelim -- a military-style Caucasian) once went into attack mode when he discovered two intruders well onto our posted and fenced property.  As he roared down upon them in full-throttle attack and leaped to connect with them --jaws open and teeth bared -- he suddenly twisted his body in mid-air to miss them, skidded to a stop beside them, and began slowly wagging his tail, his ears back, a happy expression on his face and all traces of aggression gone.  The "intruders" were two neighboring children.   Gurkha had identified this at the last moment and had halted his attack.

The same type of thing happened to ThunderHawk's Warrior Force, a.k.a., "Zadock", a year-old military-style male Caucasian.  Zadock discovered an intruder inside his home one day when the family was all out in the backyard. But the "intruder" was the 5-year-old child from next door.  Zadock was found minutes later, blocking the child's progress, but without any sign of aggression.  This is the same dog that went for a man's throat when the individual breezed into the house one day without knocking.  (This friend of the family had been warned that a guard-dog was now in residence, but obviously didn't take it seriously.  Luckily, Zadock's owner intervened to save the hapless friend.)   We've seen other cases of this phenomenon:  that even in the throes of full protection mode, the correct-temperament well-socialized Caucasian is a thinking animal, not a fired weapon.  In this case, the bullet can turn aside.

In some cases, the Caucasian is almost too good with kids.  I once received a great call from a family who has a two-year-old CO, ThunderHawk's Igor.  Igor is so protective of his young charges, that their parents must lock him outside when corporal punishment is required for the kids.  Igor will not let the children of the household be touched in anger.  The family is not alarmed, they are delighted!  There is no concern that their children will get snatched off of their doorstep with Igor guarding his flock!

--These are great calls to get!