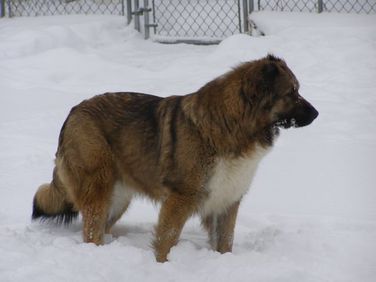 All ThunderHawk breeding stock are evaluated for conformation and temperament.  For temperament, we evaluate each dog for: Trainability, Sociability, Active Defensive Reaction (quickness of trigger), Nerve (courage in the face of strong opposition), Vocalization (the propensity for the dog to bark), Protection Instinct, and the Ability to Distinguish between a Non-Threat and a Threat.  Only dogs passing all these evaluations are utilized for breeding.  We do not breed for size or what will win in the show ring.  We breed for genetic health and temperament first, and only then for conformation. Below is a brief description of the criteria ThunderHawk uses in evaluating a dog for use in a breeding program. This particular scale was developed by Tamara Follett of ThunderHawk Caucasians in 1995, used in breed information pamphlets, and later published in our comprehensive book on the breed:

Trainability
This trait is a combination of how intelligent a dog is, together with how eager the dog is to please you.  An eager dog with no intelligence is no more trainable than an intelligent dog with no desire to please.  Both intelligence and a strong desire to please are necessary for a dog to be trainable.  All Caucasians are highly intelligent, so this category emphasizes the willingness to please evidenced by the dog.
Sociability
1)  Readiness (as a pup of 3-4 months) to greet strangers.  Willingness (as an adult) to accept nonthreatening strangers without prolonged complaint (grumbling, growling, fixed stares, etc.).  High Sociability ratings translate into a less actively defensive reaction to non-threats, if proper socialization and introductions have occurred.

2)  This is the Love of People.  It makes a Caucasian easier to socialize, and quicker to relax around non-threatening strangers.  A low-Sociability dog tends to be a one-person dog.  A medium-Sociability dog tends to be a one-family dog.  A high-Sociability dog likes everyone who has been properly introduced, and who the owners like.
Active Defense Reaction (ADR)
The propensity of the dog to attack without a command from his owner; also referred to as "Trigger Response".  A high-ADR dog will attack first and ask questions later.  Medium to Low ADR ratings are recommended for homes with a host of neighborhood kids running through the house at all times, or other situations where lots of strangers will frequently be around.
Nerve
This is the stuff legends are made of:  the dog that continues to defend the dead shepherd's body against a pack of wolves, the dog that dashes into a burning house to drag the child out, the dog that, mortally wounded, still drags itself to its owner's side, attempting to defend.  Nerve is absolutely essential in a guardian breed, and effective tests to measure the nerve of potential breeding stock should be executed successfully prior to breeding.  No dog of guardian lineage should have a low Nerve rating.
Vocalization
1)  Readiness to alert vocally, at any unusual event/sound; reluctance to cease vocalization, even when owner is accepting of the unusual event/sound.  High vocalization ratings translate into more owner corrections and are to be tempered by pairing with a dog of  lower vocalization rating.  Note that all Livestock Guardians are at the high end of this scale.

2)  The tendency of the dog to communicate vocally.  This trait is measured prior to any training in curbing the vocalizations.  Examples from the AKC world would be the Terriers and Hounds, which tend to vocalize a great deal.
Protection Instincts
Defense Drive; Active Threat Response; Intensity of Response.  No dog of guardian lineage should be bred unless the Protection Instinct rating is Medium or higher.
Ability to Distinguish Between a Non-Threat and a Threat
Caucasians are renowned for their legendary ability to distinguish between a non-threat and a threat.  This trait, however, requires a certain base level of socialization to have occurred with the dog -- no matter how well bred a Caucasian is, if you throw them in the backyard and never expose them to different people, sights, and sounds, they will consider everything a threat, and the natural ability to distinguish between an non-threat and a threat will have been lost.  This trait is also related to Sociability and the ADR-rating of the dog -- if a dog is deeply suspicious of strangers and has a quick trigger, they are more likely to strike first and ask questions later.
Copyright 2000 - 2018, ThunderHawk Caucasians, All Rights Reserved