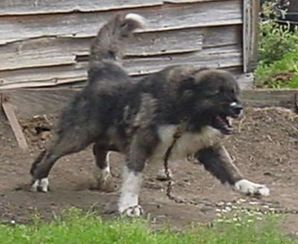 The Caucasian Ovcharka: Fierce Dog of the Caucasus Mountains

And the Beast bore down upon me,
Fierce as a Hawk,
With a voice of Thunder...

Through the open gate he hurled himself, a blur of gray led by snapping jaws descending full bore upon me. Rooted like a hare surprised by a hound, I could not move, but waited, frozen, surely to be savaged by this beast. The creature had the ferocity of a rabid animal.

And this was a five-month-old puppy.

Just in time, the lead snapped taught, and my worthless hide was spared. The beast, enraged by his containment, leaped and lunged and fought the constraint, determined to rid his territory of my dangerous presence.

This was my introduction to the Caucasian Ovcharka.

Safely ensconced in the house minutes later, I stared through the window at this same puppy frolicking with the family's children, gentle and affectionate with his own as any young canine. He wrapped his wriggling body around the young girl, evoking bursts of giggles with sloppy, wet, kisses and finally flopped over on his back in a flagrant appeal for a belly-rub. Forgotten was his rage of moments before. The threat had been removed. Now it was time to play. He looked like any normal puppy. But watching from the safety of the house, I knew better. This puppy, this breed, was different.

It was at that moment that I synthesized the essence of the breed. Here was a Hawk and Dove personality: one moment sweet and cuddly, the next, an explosive force capable of violent destruction. A loaded gun. Correction: a warm, sweet, lovable, loaded gun.

That was many years ago, and the number of Caucasians in our household has risen and fallen and risen again. While we are thoroughly enamored of this complex and intriguing breed, we see a future of only limited acceptance of the Caucasian in the U.S and Canada.

And that is good.