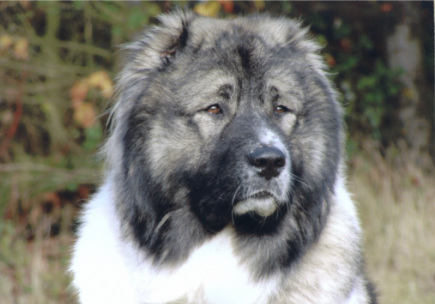 Janet H. of Columbia, NJ, tells of a birthday party she attended for friends with her 2-year-old Caucasian, ThunderHawk's Heron ("Sashka").  There were 30+ people in attendance at the party, and Sashka was wandering through the crowd greeting everyone as a friend.  Suddenly, Janet's ex-husband walked through the door.  Janet immediately became uneasy and upset -- it had been a very ugly divorce.  Her ex-husband saw Janet and bee-lined for her, apparently intent on giving her a hug of greeting.  Suddenly, from the crowd around Janet, Sashka lunged out, snarling, at the ex-husband.  When he tried to push past Sashka to get to Janet, a growling Sashka bit him on the arm -- light enough to not draw blood, but her intent was supremely clear to all present --  the ex-husband was not allowed close to Janet.  I asked Janet if she had wanted her ex close to her, and she said "Absolutely not.  It was like Sashka was reading my mind."

==> So in a crowd of more than 30 people, this ThunderHawk dog was able to single out the individual who made her mistress uneasy, and prevent that person from approaching.  This is "the ability to distinguish a real threat from a non-threat" in its finest form!  And it is what we are breeding for at ThunderHawk…

Scott R. of St. Peters, MO, was worried that he had socialized his Caucasian too much, and that she wouldn't protect his family if needed.  Then something happened to convince him otherwise.  Scott told of the evening he was in the front yard and he heard an alert from his 1-1/2 year-old Caucasian, ThunderHawk's Swan, who was in the backyard.  Intent on seeing what "Tasha" was so upset about, Scott jumped the fence into the backyard.  Suddenly, he heard a roar and loud crashing through the brush towards him.  Out of the darkness directly at him lunged Tasha, all bared teeth and raised hackles.  Shocked and surprised, he yelled, "Tasha, it's Daddy!", and instantaneously -- her case of mistaken identity resolved -- Tasha collapsed into fierce wags and play-bows!  Scott tells me he's never worried about Tasha's ability or willingness to defend his family again!

==> Many ThunderHawk owners tell us this kind of story.  As it says in the ThunderHawk New Owner's Guide, Caucasians are very visual, and if the owner looks or acts differently than what their CMD is used to, the dog will initially assume that this is a stranger and -- in the interest of protecting their family -- react accordingly.  It is sometimes the only chance a ThunderHawk owner has to observe how their well-socialized dog will react in the face of a true threat, since the dogs are too smart to be fooled by a "staged" threat.  It happened with one family when the mom dressed up in a bunny suit and their Caucasian tried to come through the plate glass window at her!  Of course, as soon as the Caucasian hears or smells that this "intruder" is in fact their owner, all traces of aggression disappear, and the dog immediately becomes submissive and apologetic!

Sergeant Mike R. of St. Joseph, MO, tells of one evening he and his three young children spent watching TV.  Mike had warned everyone from his church that he had a guard dog now, and not to just let themselves in the front door whenever they wished like they always had before.  But apparently one fellow forgot.  He won't forget again.  As he breezed through the door that evening, the family dog, ThunderHawk's Warrior Force, launched himself at the fellow's throat, only stopped from doing serious damage by Mike's quick intervention.  "Zadock" was only 8 months old at the time.  Even though being a law enforcement officer puts his family at risk from criminals he's imprisoned, Mike is not worried about leaving his family alone at night.  Zadock is there.

Karen L., of Blairstown, NJ, tells of the time that her fiancé's buddy had to spend the night on the couch, because he was too inebriated to drive home.  While her 1-year-old Caucasian, ThunderHawk's Kestrel ("Isis"), was fully accepting of the soused friend while her fiancé was home, the next morning when Gary had already gone to work, Isis disallowed the still-inebriated friend's approach.  Placing herself between her mistress and the stranger, Isis growled quietly every time the friend tried to approach.  Karen feels very safe when Gary is on the evening shift and she has to stay at home alone at night!

Mark K. of  Northhampton, PA, tells of the time his 1-year-old Caucasian, ThunderHawk's Renegade Storm ("Xena") was on their second-story balcony enjoying the lovely day.  Suddenly, a fuel truck pulled up and the driver hopped out to start his delivery.  Not for long.  Xena launched herself, roaring, off the balcony, and held the driver in his truck until the family could get out there to tell her it was okay.  With the family present, Xena was accepting and even friendly to the driver, who, needless to say, will not be leaving his truck without the family present again!

Larry T. of Middleboro, MA, bought a dog at a significant price from another breeder, because they had pups on the ground and ThunderHawk did not.  At 2 years old, the dog failed to protect Larry's home from burglars, who broke into his home while he was at work.  Disgusted, Larry neutered the dog and placed him.

ThunderHawk: Because the whole thing about Excellence,
Is how little room you leave for Interpretation...