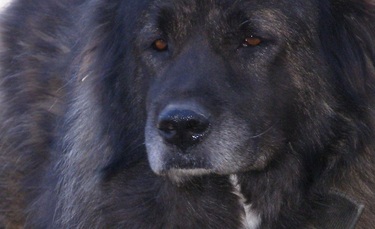 You've done your research on the right breed for you and narrowed your list of breeds down to only a few, including a Caucasian Ovcharka. Now the real work begins.

Do you really need Serious Protection?  And I mean SERIOUS.  If you don't want and need Serious Home Protection, you will probably end up resenting your Caucasian for the very traits the rest of us find valuable.  Why?  Because a great deal of responsibility goes along with owning a Caucasian:  you must introduce your CO to all strangers, you cannot let this dog run loose, and you must have a fence or other containment structure of the caliber used to contain lions.  If that isn't enough, you must socialize your CO pup until you feel sick of meeting new people in strange places.  You must obedience train to establish control at an early age and you must continue this Control-Training for the rest of your dog's life.  And you can never, NEVER, just say "Come on in!  --The door's open!!" for the rest of your CO's active life.  Why?  Because this breed's mission in life is to defend.  Defend you, defend your property, defend himself.  A stranger -- whether or not the stranger is known to you or not -- is considered by your Caucasian to be a Threat.  And threats, whether they are a threat to you, your property, or to the dog itself, are treated the same way.  How are they treated?  Well, consider the purpose of the Caucasian of Old.  Unlike most other flock-guardian breeds, which were bred to run out and scare the threat off, the Caucasian was bred to run out and KILL the threat, so it would never come back to bother the flock again.  Naturally, the intensity involved in killing a threat is necessarily higher than that needed to simply scare the threat off.  Through the ages, this higher aggression level was valued --and therefore, preserved-- by the peoples of the Caucasus regions.  It is this same intensity that drew the Soviet Military to this breed, and they bred to preserve this trait.  And so too, those who fought the dogs, or used them for warehouse and prison protection, valued those traits and selected for them.  And on through the years it progressed, to modern times when there was little to be had in the way of wealth, and what little one had was to be protected at all costs, even if the cost of protection was death for the perpetrator.  And this, the Caucasian was imminently suited to accomplish.

Today, in our civilized society, a dog that was originally bred to kill the threat does not have a place -- UNLESS the owner/handler of that dog handles it as if it were the very capable weapon that it is.  This is why a Caucasian cannot be allowed to run at large, no matter how well-socialized.  This is why the owner must be present to introduce all strangers to the dog.  This is why a fence or containment structure destined to confine a Caucasian should be reinforced beyond all conception.  This is why obedience training for control and consistent socialization are requirements for this breed, not options.  This is why you must want and need Serious Protection, in order to consider owning a Caucasian.  There is a tremendous amount of responsibility required to own a Caucasian.  There is a tremendous amount of time involved in socializing and control-training one of these dogs.  But if you need that level of protection, your Caucasian will be worth it.

Who will find all this work worth the effort?  Previous victims will.  A woman who has been shot twice fears for her life now that her attacker is out on parole.  She needs a Caucasian.  Individuals or families who are "at risk" will -- for example, law enforcement, public officials, or entertainers are at risk themselves, or their families are, because of the nature of their work:  an American Ambassador needs a military-style Caucasian because his teenage daughter has been followed home twice.  An actor familiar to the silver screen requires extra protection for his family from his "fans".  A police officer fears for his family's safety every time he leaves home -- he's put bad guys in jail, and one of the bad guys, as he was being led from the courtroom told him, "I know where your son goes to school -- when I get out, I'll be waiting for him."  The Olympic speed-walker, who trains for long hours using the same routes and at a predictable schedule, is at risk to be assaulted because her very predictability and accessibility make her vulnerable -- she needs a Caucasian.  The family that hikes in the wilderness needs protection from both the wild and human animal -- they need a Caucasian.  A high net worth individual's entire family is at risk from kidnappers, and his estate from thieves.  This individual probably needs more than one Caucasian.  But how about your average family?  Would it benefit from this Serious Protection?  Yes, if crime in the area has increased to the point where you are worried for your or your family's safety.  If you've received threats, or feel threatened by someone.  Even if you are just concerned that --even though you live in a nice area, the crazies are encroaching and you would just feel better if there were a dog in the house that could take on an intruder, allowing your family to escape  -- the Caucasian may be the answer for you.  Certainly, no child will ever be stolen out of their front yard with a Caucasian protecting them!

I can't stress the need for responsible ownership of the Caucasian, enough.  The few tragedies that have occurred in the U.S. today with Caucasians have resulted from improper containment, improper socialization, or improper control.  Inevitably, the Caucasian involved paid the price for his owner's mistake with his life.  Though I did not know any of these dogs personally, independent observers have told me their stories, and based on their descriptions of the dog's actions, in all cases, the Caucasian was not vicious.  It did not have a temperament problem.  It was simply doing its job.  Defending.  His home, his owner, himself.

If you are not willing to contain, socialize, and control an animal such as this, you shouldn't consider owning one.  If you are willing, there is no greater protection animal than this, and no greater friend to have…