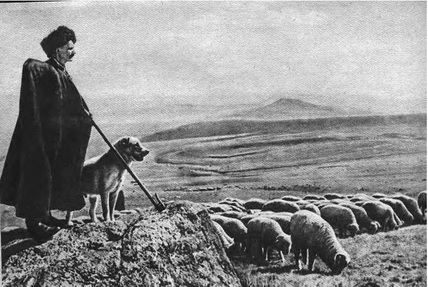 The Caucasian Ovcharka is considered to be a "natural" breed, indigenous to the region for which it was named. The first aboriginal dogs were of very good quality and sound conformation, however, their outstanding ability as a territorial guard dog placed them in great demand for guarding factories and warehouses. With the limited availability of bloodlines, and often in the interest of "bettering" the breed, Caucasians were crossed with, (among others), the Leonberger in Germany because it was phenotypically similar, the Saint Bernard in Moscow to add size, and the German Shepherd and Great Dane in the Georgian Republic, in attempts to "enhance" the genetics of the breed. As a result, breed experts within the former Soviet Republics estimate as much as seventy to eighty percent of the current Caucasian population there is mixed, despite the fact that they carry Caucasian papers. These mixes have lost the delicate balance of aggression and sweetness that the breed is known for. Fortunately for the breed, the state discovered early on that the breed's aggressiveness and resilience made them superb military and patrol dogs. For decades and to this day, the former Soviet government has bred Caucasians in state-run kennels for military guarding service, and the best specimens can be traced to those state kennel clubs which followed good breeding practices and were dedicated to the preservation of the breed.

Ears -- It was during this age that an identifying trait of the breed developed: its closely cropped ears. This was not done for cosmetic reasons, but rather to counter what was considered to be an exposure of the breed to wolves. In defending his flock against an attack by wolves, a dog with full ear leather could be grabbed by an ear by one wolf and his head dragged sideways, opening his vulnerable throat region to being ripped out by a second wolf. Another measure the herders provided the early Caucasians with in their fight against the wolves was a heavy spiked collar, again to protect the vulnerable throat region. Some of their protection against the wolves and the climate, the breed developed on its own: their coats are thick and heavy, especially about the neck; both males and females can develop a full mane, which adds to their majestic appearance. Their characteristic odor served as a warning to predators of their presence and the oiliness of their coat likely offered both heat retention and water-repellent properties.

Considered to be a "national resource", the Caucasian was exhibited at early agricultural fairs as an accomplishment of the Soviet national farmer, and exportation of the breed was expressly forbidden as late as 1989. The breed is still zealously protected and good bloodlines are expensive and difficult to get past customs despite the recent political reforms within the former Soviet Republics. However, with varying degrees of graft, ingenuity and connections, sixteen distinct bloodlines have now made their way into the United States, and Russian judges have marked many of these dogs as "Excellent" with very limited exhibitor turn-out. Thus, the prospects for the quality of the American-bred Caucasian Ovcharka are promising, despite an obvious reluctance on the part of some Russian breeders to have it so. Stacey Kubyn, founder of the breed in the U.S., told of a visit to Moscow to purchase foundation stock. Kubyn and a Russian friend answered an ad by a woman offering a purebred Caucasian bitch for sale. Upon finding instead a Moscow Watchdog (a Caucasian + St. Bernard cross), they politely took their leave. Waiting outside for their taxi, they observed this same woman exiting the building with a lovely Caucasian bitch on lead. They hurried over to the woman, offering to buy the bitch or any of her puppies. The woman stopped them. The bitch was not for sale. And as for her puppies? The woman replied, "Not for America." This is still the problem today with importing CO puppies. Stories abound of homes waiting at the airport for a puppy that was never sent, or receiving a mix-breed puppy when they paid for a purebred. 100%-money-back written guarantees from overseas are worthless -- they simply claim the dog with the genetic problems is not their dog.

Unfortunately, too few homes in the U.S. and Canada recognize a purebred from a mixed-breed, and so are vulnerable to these bait-and-switch tactics. Only  a few select breeders in North America have the knowledge to select and breed quality foundation stock -- with their help, the future of the well-bred Caucasian within America is possible.